It’s a hard thing to fly a plane, but even harder when the weather gets tought. When you can see the horizon, you can rely on your eyes and the instruments too. But what if the visibility becomes worse? It’s time to learn the definitons and the difference between flight conditions!

At first, you have to know what is VFR and IFR.

The VFR refers to Visual Flight Rules, that means flying when weather conditions are approriate to fly. There is also a meteorogical definiton to this kind of weather, we call it VMC (Visual Meteorolgical Conditions). When the horizon is clear you can see what is in the front of the plane but you don’t have to use the instruments.

The opposite of VFR is IFR, this stands for Instrument Flight Rules. There is also a meteorogical definition it’s called IMC (Instrument Meteorogical Conditions). Basically, that means flying in the clouds or fog. You can’t see where are you at, you can only rely on the instruments. Sounds scary, huh? Yeah, it does, but when you learn to use the instruments properly, it will be easy.

There are a lot of meteorological sensors in the world, they spread  information about the visual and instrumental flight conditions depending on the weather. There are 4 basic categories:

1. Low Instument Flight Rules (LIFR): if the clouds are 500 feet or below, and/or the visibility is less than 1 mile. The pilots can approach the airport hardly, when it’s timet to land, they have to control the plane by the instruments. The LIFR displayed with MAGENTA color.

2. Instrument Flight Rules (IFR): the clouds are between 500 and 1,000 feet, and/or the visibility is between 1 and 3 miles. If you experience these conditions, you should have an IFR flight plan. IFR is displayed with RED color.

3. Marginal Visual Flight Rules (MVFR): the clouds are between 1,000 and 3,000 feet and/or the visibility is between 3 and 5 miles and VFR operations can take place. MVFR displays with BLUE color.

4. Visual Flight Rules (VFR): the clouds are higher than 3,000 feet and the visibility is greather than 5 miles. The sky is clear and you can see the distance. The VFR is displayed with GREEN color.

These are the basic categories but when you are flying, the conditions can easily become mixed depending on the location, day/night flying and a lot of things.

Want to know the current weather information within the U.S.? FlyGo’s US EFB Aviation Charts application you can see the full up-to date database of the United States, with the data of more than 4,000 airports! 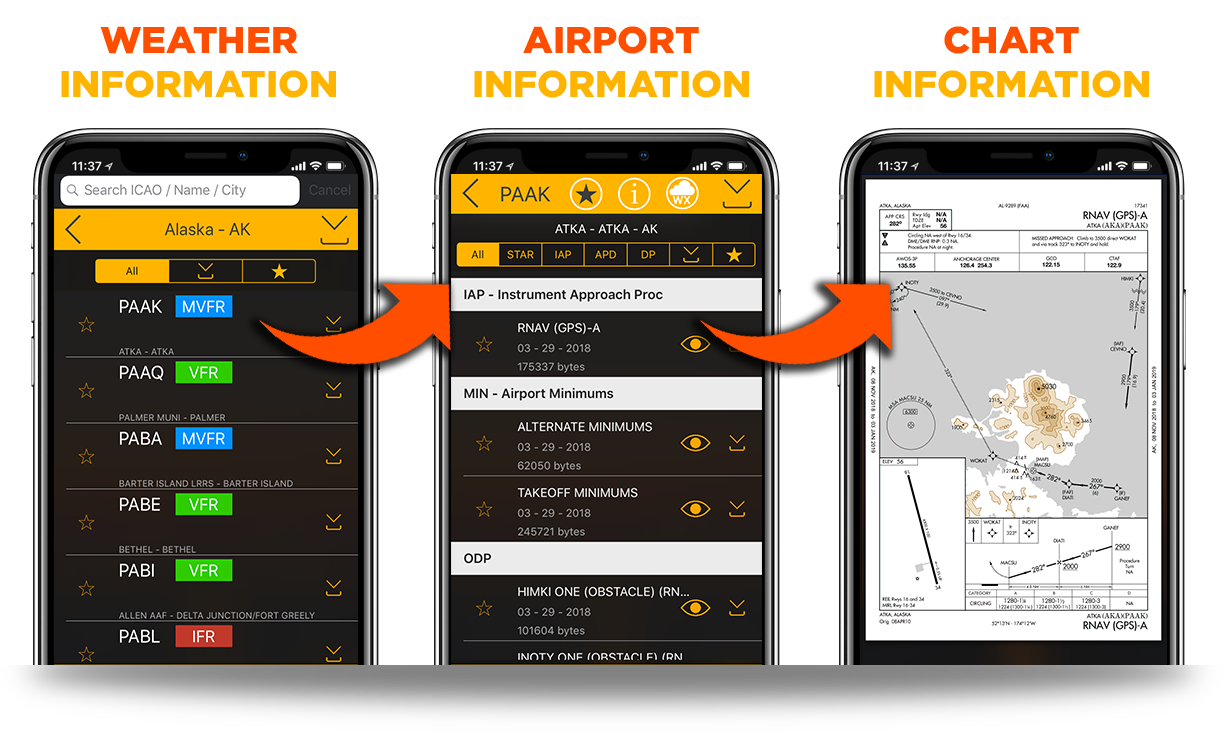