1) The lack of oxygen in the body is called…

Hypoxia (also known as Hypoxiation or Anoxemia) is a condition in which the body or a region of the body is deprived of adequate oxygen supply. Hypoxia may be classified as either generalized, affecting the whole body, or local, affecting a region of the body. Although hypoxia is often a pathological condition, variations in arterial oxygen concentrations can be part of the normal physiology, for example, during hypoventilation training or strenuous physical exercise.

2) In case of hyperventilation the blood’s…

3) Angular acceleration is sensed by the… 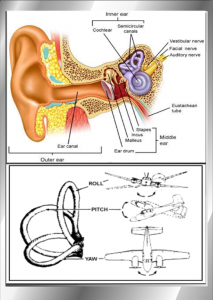 5) An illusion, that an aircraft is at a higher altitude than it actually is, is produced by…